The Colosseum is probably one of the most important structures in history where a word that we misrepresent or name something different has become its name over time. The Colosseum is sometimes referred to as Colosseum in Turkish texts and sometimes in Turkish. In this article, I would prefer to say Colosseum, but sometimes it was more correct to use the original form, so I sometimes called Colosseum Colosseum.

THEATER: The word theater comes from the Greek word “ theatron .. This word means “ theaomai gelen which means orum I see, I watch sözlük literally.Gu (Guerrini, 2017). His emergence, his relationship with the Dyonisos worship is deep enough to be the subject of another article. In ancient Greece and Rome, theater was of somewhat different meaning and technique than today. Architecturally, the Greeks built on a sloping surface, then the curved structural elements, such as arches, vaults, began to use the curved surface elements such as but not limited to the desired location, cavea, stage (skene) and orchestra, called full or semicircle Antique theaters. In ancient times, there was one theater in every city and even more than one theater in rich cities like Laodikeia. The nearest Ephesus Theater, Pergamon Theater, etc önemli are important examples of this genre.

AMPHI: Greek amphi ( αμφι ), or amphitheater, as used in our language, literally means “double”, alan on both sides sözcük . So it has nothing to do with architecture or theater. I don’t know why we call it amphitheater in some living areas. In fact, I think the word is based on Greek, “amphitheater”.

AMPHITHIATRO: If you add the two words above, it turns out. So if you put a semicircular theater on both sides, or if you add a symmetry to a theater with an axis passing through the stage, the structure you will get is a “Çiftetheatre”, or rather an amphitheater.

The Colosseum is not the first thing that comes to mind. The Latin word “ colosus ” means giant, and the Colosseum is the name given to the statue of the great-sized emperor Neron. This statue does not exist today. It was probably destroyed around 40 AD and today some concrete blocks in the same area belong to the foundations of this statue’s base.

Coliseum’s construction of Vespasian t rack from  AD 72  was started in the year, and MS  80 years in TI t usa period has been completed. Later changes were made by the emperor Domitian. Many different events were held in the Colosseum, including gladiator competitions, animal hunting, executions of criminals, mythological narratives and even the revival of important naval battles. For naval battles, the arena could fill water to a certain height.

All three emperors came from the Flavian family or, in other words, from the dynasty. There were such dynasties in Rome during the imperial period. Vespasianus, Titus and Domitian, the three emperors who ruled between 69-96 AD, belonged to this family. This structure, which Vespasian started and finished by Titus, was named after the emperors’ family name: Flavian Amphitheater.

However, perhaps due to its length or other reasons, the structure became known as Colosseum / Colosseum .

Finally, let’s talk about the word “arena an which is frequently used for such structures. Arena actually means Latince sand Latince in Latin. Or if we extend it a little bit, it means sand. Arenas or amphitheatres that were not found in ancient Greece emerged during the Roman period and were used as venues for various bloody / bloodless demonstrations.

I have always liked the comparison: Rome, like the theater in ancient Greece, took its place as a religious-artistic-cultural-educational function and transformed it into a place called the arena, where only bloody performances were often held to entertain or engage the public. This actually says a lot about the difference between Greek and Roman civilization.

If we consider this with the transformation of the name of many sports fields into the arena today, we can find many clues about the relationship between today’s society and sports, especially football. Let’s move on to the information about this building, which has been visited by more than 6 million tourists every year.

The Coloseum is located in the eastern part of the Roman Forum. The forums are the centers of the Roman cities, where trade, shopping and administrative functions are concentrated. Of course, since Rome was the capital city, its forum was more flashy than in other cities and was often equipped with administrative and religious structures. Almost every emperor undertook large-scale constructions in this forum area and built huge temples and structures.

The Colosseum was preceded by the Golden House, Domus Aurea, built by Emperor Neron for himself. Of course, it was a palace spreading over a huge area with its gardens and lake. After the death of an unpopular emperor, Nero, his palace was largely destroyed and the colosseum was built where the artificial lake was. Of course, Vespassian’s decision was not accidental. Neron, who was known for unpopular and unpleasant events, aimed to gain love and reputation in their eyes by re-allocating the space that he allocated to his palace in the center of the city to the public and the people’s entertainment. Because the emperors of the Glavius ​​dynasty became the most beloved emperors after psychopathic and extremely ill-known emperors like Caligula and Neron.

The Coliseum was not the only amphitheater in the empire. Amphitheaters were built in many Roman cities but somehow amphitheatres are not found in Roman cities in Anatolia. However, thisdoes not mean that there were no gladiator fights or similar demonstrations during the Roman period . Gladiator shows and more bloody demonstrations were held in theaters and stadiums in many cities in Anatolia during the Rom period.

As mentioned above, the construction of the building began in 72 AD during the reign of Emperor Vespasianus and was completed in 80 AD during the reign of Titus, followed by the last dynasty of the dynasty, Domitian. Domitianus has built new areas for animals and slaves to the top, especially under the arena. Meanwhile, some sources have information that they are made of wood so that the top ranks do not weigh. The gaps left on the wall in the photo below are probably the places where this wooden structure is attached to the walls…

In Rome, as in ancient Greece, theaters used to sit according to a certain hierarchy, not where they wanted it. For this reason, while visiting the theaters, we see a lot of letters or signs about who has been assigned to the seats in their seats. This hierarchy was also valid in the Colosseum:

The Colosseum, which has an oval plan, is the largest amphitheater built in size. Some quantitative information is as follows (web2):

The outer wall was constructed by connecting 100,000 tons of travertine stone with non-plastered metal clamps. It is thought that 300 tons of metal clamp is used for this. The entire outer wall is not standing today. The building was damaged in many earthquakes and some of the walls were destroyed.

Each floor of the outer wall is constructed with different architectural elements. The ground was in the Toskan order, a variation of the Doric order in the ancient Greek period, the first floor was in the Ionian and the top floor was in the Corinthian order.

Since it was not easy to illuminate a large area in ancient Greece and Rome, games and performances were performed during the daytime. Therefore, the audience had to be protected from the sun and rain. Although the Greeks have not been able to develop a solution to this, it is known that by taking advantage of the Romans’ maritime experience, they can cover a significant part of the seating areas with ropes and sail cloths. The following illustration and model shows this system. However, although the wooden elements of the system do not survive to the present day, the consoles where these woods sit on the façade are still visible.
Below are some illustrations of the cover system. The Colosseum on the far right, but others are estimates of the cover systems of other amphitheaters. In the meantime, this cover system “velarium” Let’s add that.

In the Middle Ages, a chapel, a small church, was built inside the structure, which became unable to sustain its old functions with Christianity. Over time, the building was damaged due to natural disasters such as earthquakes and the relocation of stones for use in other buildings.

Below are the great drawings and models of the building from the exhibition inside the Coliseum: 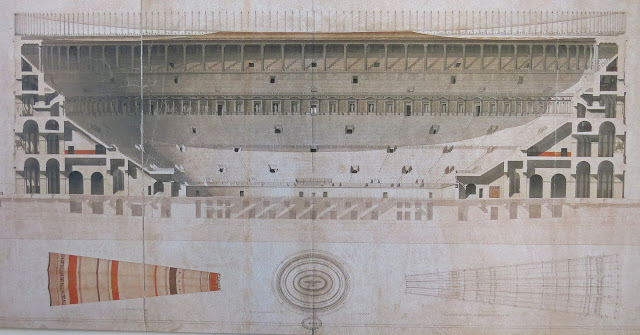 Finally, I strongly recommend this wonderful documentary about the building:

In addition, the following scene in the Gladiator film is great for feeling the grandeur of the building and for its original use: