The Fall of Ikaros

Pieter Bruegel’s The Fall of Ikaros around 1555 is an impressive work that I enjoyed looking at and immersed myself in. Therefore, I wanted to take a closer look at this painting.

Let’s talk briefly about the painter… Since
Pieter Bruegel’s son is a painter, he is often referred to as old or father Bruegel to be distinguished from him. In some sources, it can also be read as “ue” “ü Alman in German. This great masters E. Gombrich’s The Story of Art is the tremendous work introduces as follows: “

Myth, which is the subject of the painting, is very brief:

The story of the Res hero ”Ikaros and his father Daidalos is quite long. I have taken the word kahraman hero tırnak into quotes because it is a really vague situation, not to add intellectual air to the text. Anyway, starting from the middle, not the beginning, Daidalos, the first architect / master in Greek mythology, and his son work under the king’s order on the island of Crete. However, after a while, they contradict the king and the king imprisoned the father-son in Labyrinthos, which he had built and which could not go out again. Labyrinthos di Sounds familiar, doesn’t it? I couldn’t get out …
Let us hear from the Roman poet Ovidius:
Tired of Daedalus from Crete, from long exile, with the
longing of the ignited homeland.
The sea blocked him. He said: Minos
may ban me the land and the Sea, and the sky is clear, but I
go from there; it is not connected to Minos, like the world,
He gave himself to an
unknown art, Help Wished nature, bird feathers lined next to each other.
From the smallest to the larger.
Reed in such lengths while making kaval
are matched to each other, the center of linen with
the
ends of the wax joined the ends of the wings after tying slowly
turned to a bird’s wing, Icarus
was next to his father, did not know the future destruction.
His forehead was shining,
caressing the wings of the hands shaking in the air, squeezing the golden yellow wax He would
delay his father’s
work with childlike games . It was the last thing to do.
The master put on two wings, he started to shake in the
air, and he wore his son in the sky and the sky
Go between the middle way, keep my word Icarus, he said.
Deviation from the middle road, heavier wings and
descend the waters , the sun burns if you rise.
Fly in a certain region, neither look at Bootis, nor Helis, nor
Orion with a simple sword.
Come after me. After saying these things
Taught to fly, he put on his shoulders the unknown wings.
He would get wet while your old father cheered,
His hands trembled, he kissed his son one last time, his
heart trembling in front of his child as he flew.
At the height of the tree that makes the nest
to teach their offspring to fly the parent birds,
their fear of the future will show, are accustomed
Anxious to art … waving their wings
was Observing the one hand, the son of Daedalus.
The fisherman who was fishing with his trembling fishing
rod , the snuggler based on the stick, the farmer leaning against the sling,
and his son, Daedalus , were astonished .
They counted God as two people flying in the sky
,
Junos, Samos, Delos, Paros on the left, Lebinthus on the right , and plenty of honey Calymne looked.
Icarus,
thrilled with a flight of attacks, left the guide caught fire
Willing to ascend. The sun softened Ties of the
wings, melted candles,
Icarus shook his bare shoulders, the
wings that held him could no longer stand in the air,
filled with
blue waters dragged into the mouth of his father .
Icarus! Icarus! shouted
unhappy father of a paternal nature . Where are you, in which country? said.
Icarus saw
his father respond to the wings above the water, and his art got mixed up, buried his son’s
wings. It’s called by his name now.
(Ovidius, Transformations, 8th Book, 183-235)Isn’t it impressive… I would strongly recommend Ovidius’s (Methamorphoses), an important source of Greek and Roman mythology, published by Ismet Zeki Eyuboglu’s translation and wonderful preface.

Some commentators think that this myth is related to the excitement of youth, uncontrollability and perhaps arrogance that can lead to human catastrophe. Neither in the back nor in the front, perhaps this approach can be described in the form of good middle. Or directly, the father will listen to the word as well as a patriarchal commentary who wants to. Of course, the father here represents mastery, maturity, experience,

Going back to the picture…

Let’s start with an annoying anachrony, that is, history error. Our painter Bruegel made a few history mistakes. There is no history of myths, but in general the ancient Greeks think that they lived in the ancient past. Not in Renaissance Europe, no doubt. However, our painter did not refrain from dressing the peasants who had cultivated the land in the painting with their own region and period. In addition, the sailing ship in the sea is also a 16th century sailboat as far away as possible from the ancient Greek ships.

Did he knowingly made these mistakes, didn’t care, did it stem from his ignorance, or was connected with another artistic narrative, open for discussion. Maybe…

After all this, when we try to interpret the picture, we seem to have two roads leading to the opposite direction of each other. The first way glorifies the ordinary people in the painting, the peasants, and the second one.

If we go from the first, we will have to immerse ourselves in the wind of humanism blowing in 16th century Europe. Now is the time of the gods, the divine narratives, the ordinary man, the man who uses his mind, the man who created himself, against the extraordinary deities of the extraordinary world. Man believes in himself. The events in mythology are not very interesting. He continues to live and produce in his real world. Tales are not for him. Ikaros has fallen, Zeus has sent the lightning… He no longer has time to spend on them, he doesn’t even care, even in everyday affairs, they take so little space that Ikarus’s flying into the skies suddenly cannot be overlooked unless we look carefully.

The second way begins with the commentary by Gombrich’s period artists that “when playwrights and artists wanted to show people’s foolishness, they usually chose people from the lower layer.” Perhaps Bruegel wanted to emphasize the extent to which the peasants were fooled by ordinary people, or how much they were aware of “high gibi things such as“ mythology oloji. While one of the most important narratives of Greek mythology takes place right in front of their eyes, they are still worried about plowing, fishing, and feeding animals.

There is another point of view that it may be intended to defeat people. This is another path that departs from road 2. According to this interpretation, the painting emphasizes the direction of the person who closes his eyes to someone else’s pain and does not care. People who don’t care about a young man shouting from the sky and fluttering into the sea. Everyone is so buried in his own business that he doesn’t care about someone else’s pain, even death. This actually takes the picture from the 16th century to modern times. Isn’t one of the greatest weaknesses of modern man being buried in itself? (You know, art criticism can not be made without such cool sentences). I didn’t say it to keep it cool, really. If you don’t believe, ask Nietzsche or something. He will curse with the mouthful of modern man’s devotion.

I wonder what Bruegel had in mind when he was painting this… Did he want to glorify people while Icaros was brought down from the cloudy sky to the cold sea? Yeah, after all, let’s look at the picture again and think about the hero in the picture. Icarus or the peasants? 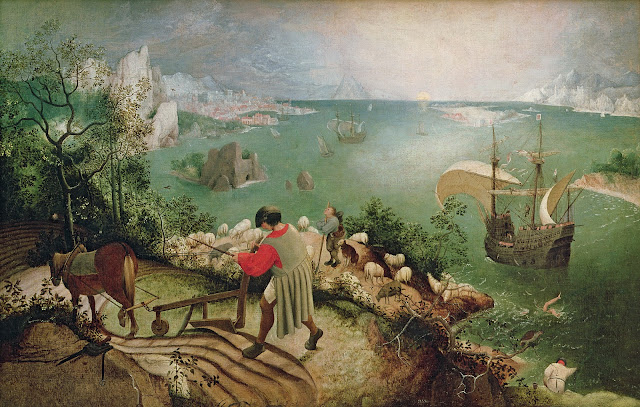 Last but not least, let me end up with three more impressive images of this myth: