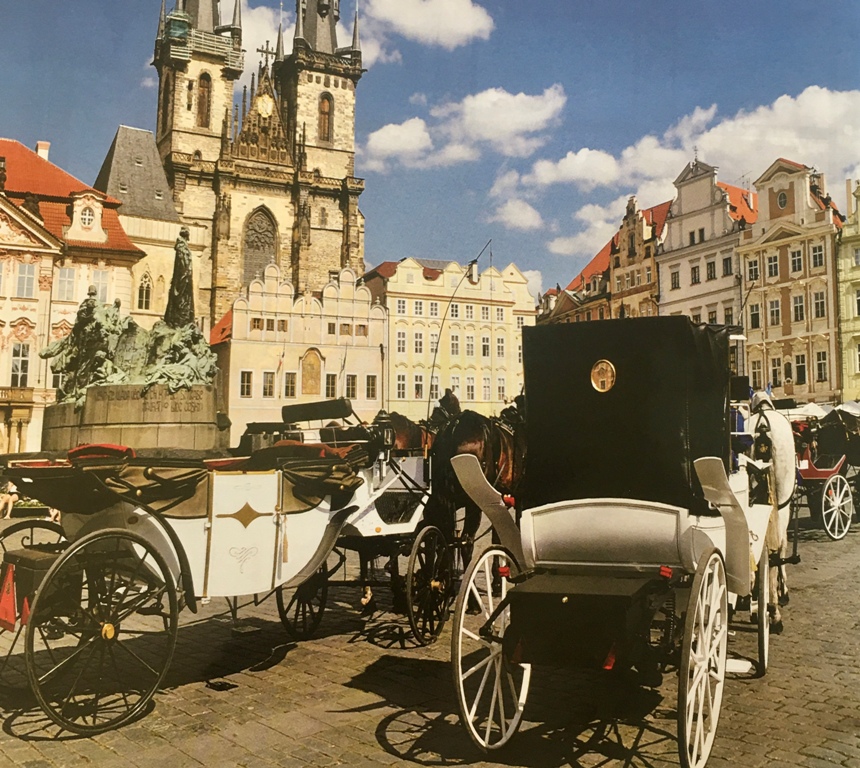 According to a beautiful legend about the founding of Prague, in the 8th century, princess Libuse, on top of the rock of Vysehrad, stated that the future of this city would be bright: “Its fame will rise to the stars”. Prague, with its surprisingly harmonious, rich and yet mixed architecture, has a unique artistic heritage.

Prague is, in a word, a magnificent city, as if it fell asleep in the 30s and watched its visitors with half-open eyelids. Before getting lost in the streets, the first thing you need to do is go to a high place and observe the city. It is not difficult to do this in the city with many towers. The Clock Tower offers a very classic perspective on Tyn’s Notre-Dame Church with its Old Town boulevard. From the Pudriyer Tower, you can be enchanted with the incredible melody of the Prague Bell Towers, and pass yourself by the stunning view of the Charles Bridge from the Observatory Tower. After this tiny sightseeing cruise, immerse yourself in winding narrow streets. To appreciate all the richness of Prague, you have to go astray. The Jewish quarter houses the best examples of New Art buildings (Town Hall, Paris Hotel, Art Deco boutique). While Staré Mesto (Old Town) combines the painted or decorated main facades of Prague (Staromestske Namesti, Male Namesti), Mala Strana (Little Edge) shines with Baroque palaces and houses (Wellenstein Palace and Saint-Nicolas Church). Painted facades, decorated motifs, 3-dimensional paintings that deceive our eyes, mosaics …

It is possible to come across something small in this city that caresses our emotions, keeps awake, surprised and happy everywhere. Culture enthusiasts will undoubtedly want to see the Baroque Art Museum and the Holy Agnes Monastery, where they will find a collection of rare religious artifacts in the old Schwarzenberk Palace. Be sure that the wealth of collections, space and quality stage design will captivate you. It is not possible to visit Prague cafes between two wonderful cultural trips. So much so that the café in the Municipality House knows how to attract attention. While sipping your hot chocolate with cream cake, you will see that Yeni Sanat’s greatest artists (Karel Spillar, Alfons Mucha …) left their mark here. The American café in the basement of the same location radiates an atmosphere as if it had been in any spy movie shot during the Cold War. Although Paris and Europa Hotels look more sincere and plain with the magic of their wooden coverings, they also comply with the New Art concept. Close to the Charles Bridge, less surprising Slavia and Lavka are the main places where Czechs love to have coffee and spend time with the river view.
Don’t think that Prague still keeps its decor from the last century. In the middle of the city’s architectural roundabout, more interconnected places (Bed Lounge, SaSaZu Prague) and attractive boutiques appear. Followers of Czech design prefer to go to boutiques called Artel, Modemista, Futurista or Qubus. Qubus was founded in 2002 by two young designers: Maxim Veliovsky and Jakub Berdych. Here, items imagined and designed by them are sold. The doors of Box, the center of contemporary art, are also open. Even traditional Bohemian glass is repeatedly visited by famous names such as Jan Capek, Patril Illo, Rene Roubicek or Loucas Jaburek, who are invited to design new collections for large houses like Moser.
Another strong point of the city is fashion. Prague has gained international fame thanks to names such as Klara Nademlynska, Ivana Follova and Helena Fevkova in women’s fashion, and Jakub Olanka and Joseph Sloboda in men’s fashion. There are also places open for children; For example, a toy boutique named Art Decor, dreamed by Lucie Blakova, gained fame with its weaving. New designers have the opportunity to sell their designs in their workshops. As evidenced by the name of the Renata Vokacova boutique, it offers a comfortable and stylish style: Bohemian. Tatiana and Katja Design workshops sell custom made evening and cocktail dresses. The old shops, where clothes, shoes and accessories from the 50s, 60s and 70s overflowed, match the image of Prague. Laly, Phase 2, Cobweb, and many of them are like Ali Baba’s caves: you have to mix them up thoroughly to find the shirt or skirt that will be trendy tomorrow.

Waltz of the Stars

Kempinsky, Mandarin Oriental, Rocco Forte, Four Seasons … all major international hotel chains meet in the Czech capital. These hotels are the biggest factors that increase Prague’s tourist level. In addition to these, the world’s first Hormis Buddha-Bar hotel consists of an average of 100 rooms and suites. Do not say too many hotels; because the hotels fit very well into this highly European city and each one is of great importance to provide the necessary hospitality to guests from all over the city. In order to understand the true value of Prague, it is necessary to digest its special atmosphere and then go to a hotel that has managed to hide this atmosphere. The options are actually not that many. Among the new hotels, there are two hotels with this feature. Mandarin Oriental and The Augustine, for their service and being former monasteries that have been remodeled for luxury hotels. You can also go deep into the city by going to New Art hotels such as Paris, Europa or Central. They hid the stylistic elements of the time (stairs, sculptures, bar …), applying the current standards of comfort. In this city, where all architectural styles are found, Baroque, which is concentrated in churches with modernity, the Renaissance observed on the facades, and the 17th century, which is seen on the streets, try to keep place and time in unity.

From Design to the Monastery

The Augustine Hotel, which is religiously important, is two steps away from Charles Bridge. The transformation of the 13th and 19th century monasteries and additional buildings into this hotel, which is one of the latest examples of Rocco Forte collection, was accomplished with 3 years of hard work. In the 117 rooms and suites where architect Martin Kotik and art director Olga Polizzi presented items reminiscent of Czech cubism, the harsh atmosphere of the monastery did not pass: Vases, mirrors, paintings and furniture were produced by the pioneering designers of this trend (Pavel Janak, Adolf Loos). The TV, mounted on the wall and opposite the bathtub in the large marble bathroom, shows how luxurious the rooms are. Monastery life fits wonderfully with the modernity seen in the common areas where visitors are located (lobby and restaurant). The armchairs and sofas dominated by bright red and warm brown are in harmony with the architecture of the lobby. At the end of the day, direct your direction to Tom’s Bar. In this bar with the Baroque fresco of the 17th century, the most popular cocktails are named after Michael, Raphael and Gabriel, the 3 angels.
True beer enthusiasts prefer to go to The Brewery Bar, where they will taste the Saint-Thomas beer that the monks made inside the cave. Since the 17th century, the cave has not been touched with its stalactites and stalagmites. Finally, the round wide banquets in the restaurant soften the contemporary decoration and add a different atmosphere with 3 old trees, 150 years old, placed between the tables.

Happiness on the Plate

In addition to the Prague Four Seasons having an unimaginable location to wander around the city, there is the Allegro restaurant, which received the first Michelin star in Central Europe. A modern building was added to the hotel in 2001 as a result of the combination of 3 historical buildings dating from 1737-1883 and the architects of the building managed to combine all these different styles perfectly. The decoration of the lobby and halls are reminiscent of the 19th century architecture; The restaurant has a more contemporary atmosphere. 161 rooms and 20 suites offer the luxury worthy of such a building.

What is as beautiful as a dream is of course staying in one of the rooms or suites overlooking the Vlatava River and the famous Charles Bridge. We recommend you to taste delicious Czech food at the Savoy cafe for lunch; Especially the sausage, cabbage, Prague ham and fancy cakes.

In Search of Kafka

Let’s meet at the Century Old Town Hotel to return to the time of Franz Kafka, the iconic face of the Prag. The author dates back to 1908 for an insurance company in this 1896 building.
He worked until 1922. After that, serious offices gave way to this hotel, a member of the completely renovated MGallery collection. Let us remind you that this famous collection, initiated by Accor in September 2008, often brings together buildings that are loaded with history and benefited from an extraordinary situation.

Century Old Town, located in the heart of the old town and two steps from the magnificent astronomical clock, fits into this situation. As for references to the great man: A bust of Kafka greets visitors in the lobby! The author’s books are among the most valuable books in the wainscot covered library, while the most popular cocktail in the bar called Chapter is called “Kafka’s dream”. Room 214 is of course the most beautiful room to stay. Kafka’s old office filled with personal memories such as a photograph of his family and a few of his writings framed on the wall.