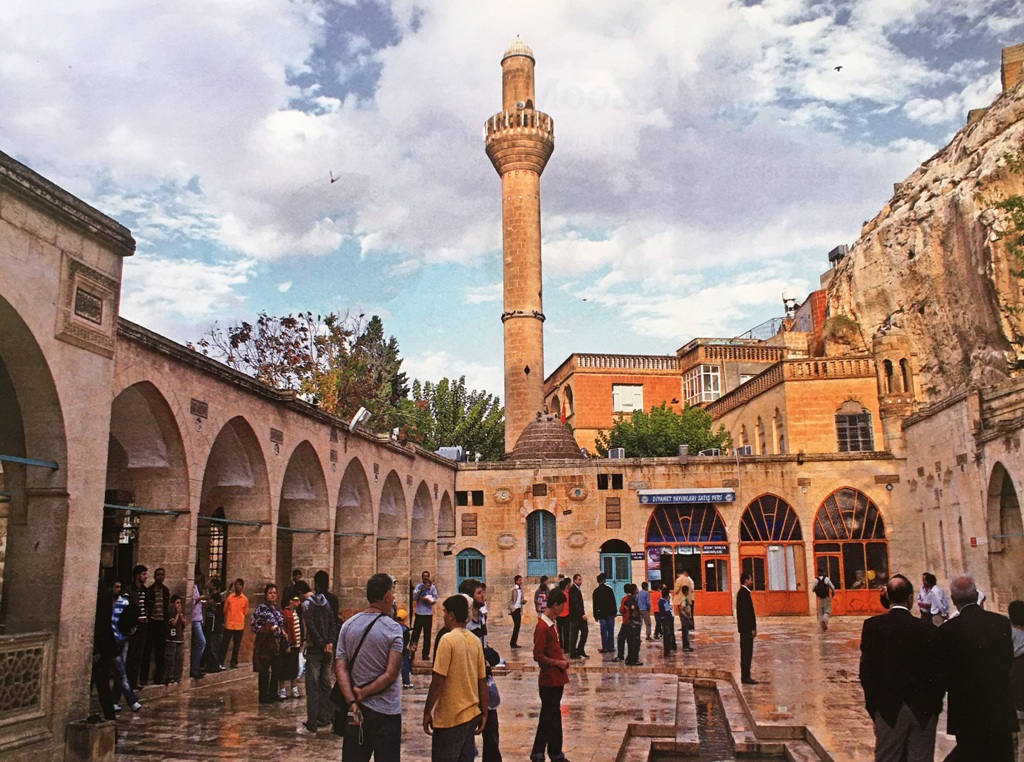 With its thousands of years of history and legends, Urfa offers you a different beauty in every street you step on …

HOW SHOULD I VISIT?

We can offer two different travel plans for 2 days and 3 days to visit Urfa.

1 day; In the city center, you can see the Culture Site, which consists of old Urfa buildings, Balıklıgöl and Anzilha Lakes, Halilürrahman, Hasanpaşa and Rızvaniye Mosques. You can buy Urfa cloths, isot, coffee, and mırra cups that we can give as gifts from Urfa bazaar. At the end of the shopping, you can have a rest in the historical Gümrük Han; You can attend the evening turn night event.

1 day; Rumkale and Halfeti can be toured with a boat tour on the Euphrates River.
2 days; You can take a long day tour that includes Harran houses, the historical ruins of the world’s first university, the city of Shuayb, 38 kilometers from Harran, and the Ancient City of Sogmatar.

3 days; Cultural Site, Balıklıgöl and Anzilha Lakes, Halilürrahman, Hasanpaşa and Rızvaniye Mosques can be visited. At the end of the day, after shopping in the historical bazaar, you can join the evening row night event.

Historical covered bazaars where dozens of different professions are performed and countless products are sold make up the shopping center of Urfa. The heart of this bazaar complex beats in the Bedesten Bazaar. The other name of the bazaar built in the 16th century is Kazzaz Han. Shawls, veils and bindal residents from Aleppo, Damascus and Iran paint the bazaar in a rainbow of colors.

One of the four gates of Bedesten opens to the Sipahi Bazaar. When you look at the products in the bazaar, which consists of tiny shops selling carpets, rugs and felt, you do not understand how time passes. When you feel tired, you should stop by Gümrük Han, the best address in Urfa. While small workshops were feverishly working on the upper floor of the square planned inn dating to 1562; the elders of the city calmly play checkers in the courtyard.

In addition to the İsotçu Bazaar, which is created for chili peppers that come to mind when talking about Urfa, there is a bazaar for almost every profession in the city. Knife seller, felt seller, furrier, tent seller, income, cotton and armchair bazaars are some of them.

The coppersmiths, which are listed in the bazaar, also known as the Hüsniye Bazaar, make pans, pans, saucers, pitchers and various souvenirs all day long with hammering hammer technique. The old streets and stone houses centered around the bazaars are still very impressive. You cannot enjoy walking in the streets of Urfa, which are connected by arched passages, resembling a labyrinth.

Urfa is a city that attracts people not only with its historical places and rich environmental options, but also with its food culture. The history of raw meatballs, the first thing that comes to mind when talking about Urfa cuisine, is Hz. It goes back to the era of Abraham. Dozens of Urfa dishes such as eggplant kebab, borani, lebeni soup, bulgur meatballs, garlic vaccine, isot pot, lettuce, onion pan and masluka are special dishes that enrich the local cuisine, although they are not known as raw meatballs.

Urfa’s desserts are just like their dishes. Paliza, zerde and cheese halva are some of them; However, “Şıllık Dessert” has a special place in Urfa cuisine. The bitter coffee mırra, which is drunk after the meal, differs from the coffees we know as it is made and served. After the roasted coffee beans are drawn coarsely, they are placed in a pot with 1/2 glass of water and boiled until it evaporates at a rate of 1/3 and left until the pulp completely subsides. Filtered coffee is boiled again and served in small cups without handles.

If you did not go to the area by a tour, you can attend the row night activities at the Guesthouses. According to the tradition from the past, the meetings held by groups of friends whose ages are close to each other, one evening a week, at the home of another friend every week, according to a certain quality and order, are called “row night” in Şanlıurfa. Music is performed within the tradition of the Urfa makam, created by people who can play or read any instrument. The main purpose of the queue night; conversation, solidarity and sharing. Queue nights are usually held in houses with floor exhibitions. Row members sit cross-legged on the ground.

There are historically important places in the immediate vicinity of Urfa as well as in its center. Harran, which is 50 kilometers from Urfa, comes first among these places. The region, which has the world’s first university, is one of the oldest settlements known for its conical-shaped houses. The height of the houses is 4-5 meters and they do not have windows. Lighting is provided by daylight entering through the hole above the houses. Houses built with adobe on the bottom and brick on the top are cool in summer and warm in winter.

The district, which is under the waters of Birecik Dam and Euphrates and divided into two as old Halfeti and new Halfeti, is under protection due to its historical and natural beauties. New structuring is prohibited except for public institutions. Armenian stonemasons have a share in the magnificent architecture of the old buildings. Halfeti houses usually reach two floors and occasionally three floors with intermediate floors. The construction, which keeps pace with the sloping land, allows every house to watch and live the insatiable beauty of the Euphrates lake basin.

The city was renamed Şanlıurfa in 1984 due to the heroism of the people of Urfa in the war. However, Urfa’s oldest known name is Urhay, which was given by the Arameans. When the Macedonians came to the city, the name they gave was Edessa. Today’s name Urfa is derived from the Syriac word Urhai; Urhai is thought to originate from the Arabic word Er-Ruha, which means “plenty of water”.

The most special place among the legends told in Urfa is undoubtedly Hz. The story of Abraham being thrown into the fire. Islam, Judaism and Christianity, which are three religions with one god belief, are known by the Prophet. It is rumored that Abraham was born in Urfa. The story is that the king of the region, Nemrut, and Hz. Passes between Abraham. According to the legend, King Nimrod sees a sign in the stars telling that a man will wage war on him and his idolatry. This man is Hz. Abraham. However, he not only rebelled against the idolatry of Nemrut, but also fell in love with his daughter Zeliha. King Nemrut, Hz. He orders Abraham to be cremated. A fire that can be seen from all over the city is lit at the place where Balıklı Lake is located today. Ibrahim is thrown into the fire with the catapult between two large columns built on the hill opposite the fire. However, fire turns into a lake and wood turns into fish. Since that day, the lake here is considered sacred. Just like the lake, the fish in it are also sacred; It is believed that whoever eats these fish will be blind. After that day, the name of the lake becomes Halil-ur Rahman. This name, which means “Friend of God”, is Hz. It reflects Abraham’s holiness. Today the lake is known as both Halil-ur Rahman and Balıklıgöl. From the tears of Nemrut’s daughter Zeliha, who cries for Ibrahim, another small lake is formed right next to Balıklıgöl, the name of this lake is “Ayn-Zeliha”, which means “Zeliha’s Eye”. Two columns, believed to have been used as catapults, are still standing on the hill opposite both lakes today. According to belief, under one of these columns there is “never-ending water” and under the other “never-ending gold”; If one collapses, Urfa will be buried under Urfa, and if the other is destroyed, the city will be buried in water, which is as valuable as gold for Urfa.

In Şanlıurfa: furry is a common handicraft; Furs and vests made of lambskin are manufactured and sold at the “Kürkçü Bazaar”. If interested, you can get a vest. Also: one of the common handicrafts in jewelery. Gold and silver jewelry such as rings, bracelets, necklaces and earrings are manufactured. These art-related products can be found in jewelry shops around Yıldız Square and in Pamukçu Bazaar. Lastly: Head covers called “Yamşah” and “Pusu”, woven on looms called “Çulha”, are the most common products in Urfa. These products are sold in “Bedesten” near “Gümrük Han”.

Grand Urfa Hotel, which started to serve in 2007, has a total capacity of 120 beds, including 58 standard, 2 suites, 10 non-smoking rooms. Located within walking distance to the historical Balıklıgöl and bazaars, the hotel rooms; You can find all the details of 4-star comfort such as direct phone, wireless internet connection, central heating system, encrypted safe and 24-hour room service.
www.grandurfa.com